Celebrating 40 Years in Media and What’s to Come

Celebrating 40 Years in Media and What’s to Come 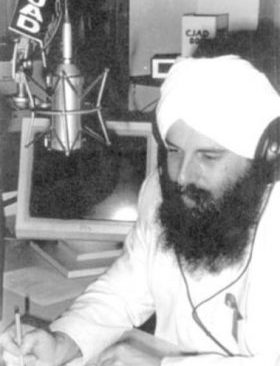 Yogi Akal is a renowned global media personality who has appeared on television, radio, the internet and in print.

I was cleaning out my digital files when I came across some old videos of me on air, including appearances on CNN International, The Montel Williams Show in the United States, CBC in Canada, and Channel 2 in France. I thought back to the first time I appeared on television in Vancouver, British Columbia in 1975 and pondered the journey that has led me to appear in media around the world for over forty-five years.

I recalled making a New Year’s Day appearance on CNN in Washington D.C., where I was asked to comment on the nations of the world and, shortly after, on the same network, participating in a roast of comedian Richard Lewis in Atlanta. In Chicago, I appeared on the same TV stage where Oprah launched her talk show.

I remembered my appearance on Medical Matters in Trinidad, which was also broadcast throughout Africa, and AméricaTévé, which was filmed in Miami and broadcast in the United States and throughout Latin America. What a surprise it was that, when I was booked on The Charles Perez Show in New York City for the third time, MCI broke due to the enormous volume of calls that came in for me immediately after the program.

My first radio gig was in 1973 on “underground” FM radio. I went on to produce my own shows in Los Angeles and had a lot of fun on British radio in London, KISS radio in New York and Virgin Radio in Dubai. There was also the time on ABC International radio where I joined a panel of doctors, giving comfort to military personnel in the Persian Gulf and listeners in North America

My favourite radio show was on CJAD in Montreal, eventually simulcast in Toronto and streamed worldwide. After twenty-five years, it became the longest running radio segment in Canada.

The first time I worked with a print editor was at the wonderful Beverly Hills Magazine. Appearances in Elle, Glamour, Sports Illustrated, the Globe and Mail, and the Toronto Star followed.

Once I hit the Internet, I was blogging and providing online content to media outlets from the Huffington Post to NBC Universal.

On a CNN overnight show, the host told me that I’d just talked to more people than I could ever reach any other way, and he was right. That night, I’d reached millions of people. I can’t remember how many TV and radio shows came after, but I have hundreds of recorded hours on air.

From Mojo Radio in the prairies, to talk radio in Northern Ireland, from INTV in Europe to WGN in Chicago, from Breakfast Television in Toronto to WIN TV in the Caribbean, it’s been a pleasure and a privilege to reach such a range of communities. But as entertaining as it is to look back, it’s much more exciting to look forward. At sixty-eight, I feel like I’m just getting started.

Every host I’ve worked with has asked me when I’m going to write my book. The answer is: now. Along with this year’s launch of my podcast, The Renaissance Mind, I’m expanding to yet another form of media as I sit down to write a book on the same subject, bringing audiences along with me.